"My Nerves Are Shot" 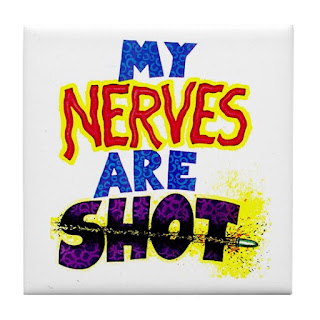 (Image courtesy: Cafe Press)
It's a common way to describe your stress, pain, challenges, etc.  I've felt that way for most of February 2022.  So, here's my story.

For the last 3 months of 2021, I was caring for 2 family members who had health issues, and recent medical interventions.  It was nothing life threatening, but long recoveries ensued. This took up much of my time and it was quite the juggling act.

When your schedule changes this abruptly, you function on pure adrenaline.  As you try to be as flexible as possible, you concentrate on the most pressing issues at hand, and let other things go by the wayside.

"Getting through the day" becomes the mantra that take over.

Think back to a time when you've been on this kind of a schedule.  You're running on pure adrenaline, as the saying goes.

Until your nerves are shot.

What does that really mean?

Running on fumes, is another saying.

There is so much energy expenditure, you do reach a point when you need to pay the piper.  When you take from your nervous system you have to give back.  Chiropractic helps you give back.

I remember my freshman year of college.  I began to stay up late so I wasn't missing the fun with my new friends.  How long did that last before I slept through a morning class?  We used to laugh and say, "Something's gotta give."  You burn the candle at both ends and you crash so to speak.

When you take from the nervous system, it will demand something back.  It will demand down time in order to recover and rebuild.  This is generally what we call pain and disease.

For me, things began to settle down after three months.  My brain didn't have to stay in fight or flight anymore.  The hyper-vigilance could end.  It was time for catch up.

While tackling the laundry, messy house, and the lonely dog, my body said, "What about me?"

This is when my nervous system was shot.  In reality, the nervous system is not shot, but it needs serious rebuilding.  How did I know?  I had a lot of pain in my hands.

People have asked over the years about my hands.  They wonder if my hands hurt after adjusting a lot of spines.  I always tell them, no. But now I had to think about it.  I had achy sore hands.  Was this a foreboding of future problems? Well, I don't think like that.  Aging is not in my vocabulary.  It is not mentioned in my office.  I set all that negative talk aside and just accepted it for what it was: a time of rebuilding.  And cellular movement of this magnitude h-u-r-t-s.

Pain is a purposeful indication that the body is rebuilding.  Old cells moving out so new cells can move in is what I was feeling. Rather than panic and tank up on mitochondria damaging analgesics, I slowed down a little bit, modified my activities and realized it might take a month or more to pay back the piper.

I had hand pain.  It was both thumbs, digits #2 each hand, and the thenar muscles. My hands were sensitive when I grabbed items or held onto the steering wheel of the car.

I modified the way I adjusted people.  As a chiropractor I taught myself how to deliver the adjustment in multiple ways for the practice member's comfort as well as my own.  I now only use my tuning fork once or twice a week for no more than 90 seconds.

I will emphasize that I modified my activities, I did not give them up.  If you lessen the demand on your joints, the body will lessen the function.

When I was in chiropractic college we were taught about the problems of repetitive stain. It's a commonly attributed to carpel tunnel syndrome or standing for 8 hours a day on the job.

For my retired practice members who played a ton of sports in high school and college, I know, coaches ignored the importance of replenishing.

Every time someone pops a pain pill, their healing - rebuilding -  replenishment is interrupted.  And then they are adding more stress to weakened tissues by covering up the warning signals telling you to rest.   That's like putting all your trust in a wooden bridge that has seen decades of weather and no type of repair.

By mid-March I felt confident that my rebuilding stage was completed. The pain is now a memory that is not relived with any angst.

I have a pain-map diagram in my office that I use to show people where they are in the 2 stages of nervous system function.

It does a better job of describing that antiquated term, "arthritis," or what's going on with a herniated disc.

The chiropractic adjustment helps you regulate your nervous system transition between fight or flight and rebuilding.

I did not become a chiropractor to be a spine-mechanic.  We can take the power of chiropractic so much farther!  I am a brain programmer.  You are brain programmer, too.  You might be letting it happen by chance.  But I can teach you how to use your brain in a deliberate manner for your best, vibrant, life.