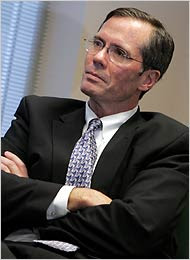 I received this in an email message today from vaccinechoice@gmail.com and copied and pasted it here:

The temporary restraining order by the judge, Thomas J. McNamara, an acting justice of the State Supreme Court in Albany, is likely to add to the growing debate about the flu vaccine.

Justice McNamara scheduled a hearing on the case for Oct. 30.
On Aug. 13, the state health commissioner, Dr. Richard F. Daines, through the State Hospital Review and Planning Council, issued a regulation ordering health care workers to be vaccinated by Nov. 30 or face fines.

Dr. Daines said at the time:

Questions about safety and claims of personal preference are understandable. Given the outstanding efficacy and safety record of approved influenza vaccines, our overriding concern then, as health care workers, should be the interests of our patients, not our own sensibilities about mandates. On this, the facts are very clear: the welfare of patients is, without any doubt, best served by the very high rates of staff immunity that can only be achieved with mandatory influenza vaccination – not the 40-50 percent rates of staff immunization historically achieved with even the most vigorous of voluntary programs. Under voluntary standards, institutional outbreaks occur every flu season. Medical literature convincingly demonstrates that high levels of staff immunity confer protection on those patients who cannot be or have not been effectively vaccinated themselves, while also allowing the institution to remain more fully staffed.

Terence L. Kindlon, a lawyer for three nurses who sued the state, asserting that the order violated their civil rights, said the judge’s ruling was a victory. New York was the only state in the country to mandate vaccinations for health care workers, he said.

“These are not libertarians, they are not lefties, they are not right-wing lunatics,” Mr. Kindlon said of his clients in a phone interview on Friday. “They are health care professionals, and they think the vaccination is not going to be good for them. They have no confidence that either the seasonal flu vaccine or H1N1 vaccine is going to do any good for them.”

Mr. Kindlon said of his clients: “They basically were being administratively ambushed. This regulation came out of the Health Department during the dog days of August. People weren’t aware of it until September. Then they were suddenly advised that the drop-dead rate for receiving the vaccination from the state was Nov. 30.”
The hospital imposed its own deadline — mid-October — for vaccinations for its employees, Mr. Kindlon said.

The state is all but certain to fight the lawsuits and seek enforcement of the mandate. At a legislative hearing on Tuesday, Dr. Guthrie Birkhead, a state deputy health commissioner, defended the mandate, saying, “Health care settings are no different than any other setting where vaccination is the most effective method of preventing influenza.”

The issue of mandatory vaccinations has divided health care workers and even experts. The New York State Nurses Association, for example, has been monitoring the situation but not taken an official position against the requirement.

The Public Employees Federation, which has about 5,000 members covered by the regulations, said it encouraged its members to be vaccinated against the flu but opposed making the vaccine a condition of employment.

Patricia Finn, a lawyer for Suzanne Field, a nurse from Poughkeepsie, N.Y., who has filed a lawsuit in State Supreme Court in Manhattan challenging the mandatory vaccinations, said on Friday that her case would proceed despite the Albany restraining order, but added about the temporary restraining order:

We’re absolutely thrilled about it. I’m very pleased that the whole process has been slowed down. That’s what we’re so concerned about, the process of vaccinating. It’s not like getting your teeth cleaned; it’s pretty serious. It shouldn’t be taken lightly. So we were happy about this.

Protect your health freedom. Stay on top of news like this and support the lawsuits.

Dr. Lisa
Your Health Freedom Coach
at October 16, 2009 No comments: